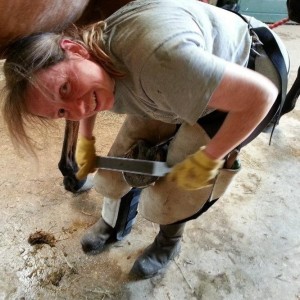 I would like to be able tell you that I am someone who had the vision and curiosity to discover Applied Equine Podiatry for myself but that wouldn’t be true. It was my horse Charlie that started the whole experience.
My journey started around 2004 with my American flat ex-racehorse, Charlie, who I had owned for 10 years. During those 10 years I had religiously paid my farrier every 6 weeks without fail and then, forgotten all about it, not really wanting to take any interest in my horse’s feet.

Charlie however had become progressively more difficult to shoe, and this was not just with one particular farrier, but several. Charlie hated being shod and I had resorted to sedating him every time to avoid any injury to himself or the people around him.

I hated having to hold him for the farrier as he would rear up,trying to get away, and all three farriers hated shoeing him.  Then Charlie began to be lame for a couple of days after shoeing, this gradually increased until he was lame for nearly two weeks, then before he was due to be shod again he would lose the shoe.

In desperation I started searching the internet for solutions and became interested in “going barefoot”.  The farrier said that a thoroughbred like Charlie would just not be able to cope without shoes, by now however  the farriers also started refusing to shoe Charlie.

It was a Catch 22 situation. I decided one day to take Charlie’s shoes off and see what happened.  Back then there were less experienced barefoot practitioners around and it was a long and painful transition for poor Charlie who was already over 17 at the time. However I certainly gained a lot of valuable experience in how not to do things!

In 6 months time I was amazed at the change in Charlie and he went from strength to strength over the next few years, reaching the National Veteran dressage finals in 2009. At the time of writing Charlie is 24 and is still in work, hacking on all surfaces and still picking up rosettes locally at his favourite pastime of dressage.

In 2008 my second horse,  Blue, came on the scene. Blue is also an ex racehorse, and from the exterior his feet looked far worse than Charlie’s being asymmetrical with one much larger (3/4 inch in diameter) than the other! In addition he had uneven back and shoulder musculature, doing a credible impersonation of Quasimodo!

He did not seem to have been looked after at all and was also diagnosed with navicular changes. My journey with Blue inspired me to follow the path of becoming a DAEP by enlisting as a student with the Institute of Applied Equine Podiatry under the tutelage of KC La Pierre.

I graduated as a DAEP in November 2011, passing both theory and practical exams. I have other equestrian qualifications.  Due to Blue’s asymmetry I have also trained to become an Equine Body Worker in order to help him and also taken him to two of Klaus Schoneich’s clinics which have had miraculous results.

I enjoy going out to see clients and helping them with their horses and I enjoy trimming. The people that I meet often really have their horses best interests at heart and are open minded.

My main area of focus currently is to look at the bodywork (of the horse) and see how it relates to the feet and work on both aspects simultaneously. As an equipilates™ teacher I am also well placed to assess rider posture and spot any imbalances. From my own journey I also have some idea of  beneficial exercise programs for your horse.