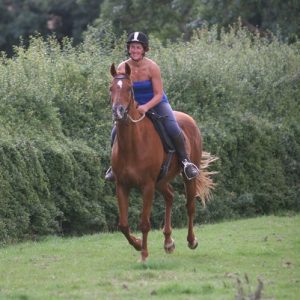 My name is Linda Kerry and I achieved my Diploma in Applied Equine Podiatry in March 2010 after studying under the personal guidance of KC LaPierre.

Having loved horses all my life I finally became a horse owner in July 1999. I bought a handsome Thoroughbred, Arnie, to share with my daughters. I had absolutely no idea at that time what he would teach me or where he would lead me.  From that day forward I have continually been expanding my equine knowledge.

As well as graduating from the Open University with a BSc Hons in Biological Sciences in 2002 I have also achieved Spillers Nutrition Level 1 (2002), Parelli Level 2 (2006), Diploma in Equine Touch  (2007),  Diploma in Applied Equine Podiatry and most recently  gained 100% when taking the online Edinburgh University Certificate in Equine
Nutrition (2013).

My journey to becoming a DAEP started in June 2006 when I called a new farrier out to my horse.  At that point in time my 16 Year old TB’s hooves were falling to bits and nails were being replaced in his shoes every other day in a bid to keep them on.  On top of that he was more often lame than sound having been diagnosed with navicular pain 2 years previously. I felt it was time to try a new farrier and see what he had to offer.  To cut a long story short he spent a long time with me and my horse before finally turning to me saying that the only option I really had was to try barefoot.  As an Equine Touch Practitioner I knew it made total sense – but I had a thoroughbred with atrocious hooves how on earth could he cope? We had a long chat and I decided to give it a try, after all what was there to loose?   He could always have shoes put back on – if we could find a way of keeping them on that is!!

Although everyone around me thought I was insane that day was the turning point.  I couldn’t believe the changes that occurred in a very short time.  Not only did my horse’s hooves improve beyond belief but he became sound again.  Amazingly my uptight TB also learnt to relax for the first time in his life.

As Arnie’s hooves continued to improve we began to do all the things we had been unable to do; hacking, schooling, horseball, jumping, bridleways rides – all without shoes – life became fun for both of us again.  When my farrier moved on I decided it was time to learn how to look after Arnie’s hooves myself so enrolled on my first course with KC LaPierre.  Oh my goodness I couldn’t believe how much theory there was to learn – my head was filled to bursting.  As it all rushed around my brain it all made so much sense. I needed to learn more so committed myself to becoming a student of the Institute of Applied Equine Podiatry. As such I attended practical courses in the UK and Florida and worked through 10 theory modules and examinations before I could apply to take the final practical exam. On a sunny day in March 2010 I undertook that practical exam and was delighted when KC awarded me my Diploma and welcomed me as a DAEP.

Horses Inside Out Winter Series lectures