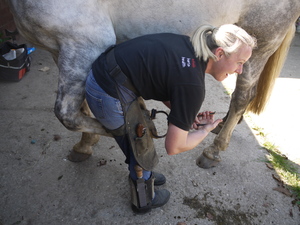 Beccy is also a SCENAR-cosmodic therapist and Equine Sports Massage therapist and trained with the International Equine Body Workers Association (IEBW). She is also a qualified BHS groom and has a BSc. honors degree in Equine Technology and Business. In addition, Beccy is a wellness coach and qualified healer.

Beccy has worked in a number of prestigious equine facilities including Gleaneagles Equestrian Centres in Scotland and Trent Park Equestrian Centre in London before becoming a yard manager for the British Armed Forces in Cyprus. After leaving Cyprus in 2001, Beccy briefly worked as an RSPCA inspector but soon returned to her passion full-time once more and whilst in her twenties, Beccy opened her own Equine Rehabilitation Centre and Luxury Livery in East Yorkshire. ‘Equilux Livery Ltd’ was featured in a Horse and Hound magazine in 2004 as one of the ‘top 3 poshest liveries in the UK!’.

After selling the business in 2007 Beccy continued professional training and was soon self-employed full-time as an equine therapist and later, a podiatrist and her business ‘Holistic Equine’ was a phenomenal success. Her customers were based all over the country and included the horses and ponies at Think Like A Pony HQ in Leeds and Thunderbrook Equestrian in Norfolk.

In 2014, Beccy and her family relocated back to their roots in West Cumbria and she started an orthotics manufacturing business with her husband Mark. From 2015 to 2018, Beccy has developed both her entrepreneurial and healing skills and qualified as a healer with the International Church of Healing Fellowship in 2017. Beccy continues to develop her spiritual skills and also continues to learn advanced podiatry.

In 2018, Beccy rebranded and joined forces with her mother Val and Holistic Reflections was born! Beccy has become passionate about not only helping horses but people and their pets too. Holistic Equine is now an educational website dedicated to informing about holistic horse care and raising welfare standards.

Beccy is thoroughly dedicated to helping people, pets and horses beyond those she and Val can visit in person and they believe education is the key. In 2018, a series of educational talks and demos were introduced and these will be extended in 2019 to include workshops and conferences.

Beccy hopes she inspires others to seek ways to connect, balance and evolve their own lives and those of their animals too in the hope that we can all lead happier, healthier, longer and more fulfilled lives!​

Cumbria and the surrounding counties and the Scottish Borders.

Member of Institute of Applied Equine Podiatry (MIAEP) from Jan 2019