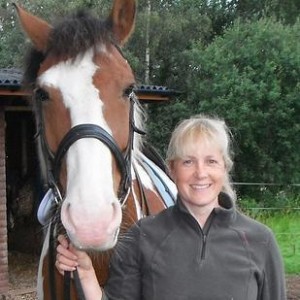 Coming from a horsey family I have owned and ridden ponies and horses from an early age. I competed in all disciplines throughout my childhood, then trained through the BHS exam system, becoming a BHS AI. I taught riding and schooled horses both in a riding school, and freelance.

I’m interested in classical dressage and have competed and won in affiliated competitions to medium level. I believe that dressage training should develop the horses well-being, and should not require physically or mentally harmful training methods.

I became involved in natural hoof care in 2002. My partner David and I were buying, backing and selling young horses. We were impressed with how sound and capable those horses were barefoot, and in the improved soundness and performance of older horses we de-shod.

I began researching trimming methods, being particularly impressed with the work of American trimmer and educator Pete Ramey, and decided to trim our horses myself.

I started being asked to trim for friends and clients I taught riding to, and was soon trimming part time. I decided that I wanted to trim full time and offer more people the benefits that barefoot had brought to us and our horses.

I completed the UKNHCP course in 2009, and have built up a busy hoof care business. Clients range from competition horses to happy hackers, and also the rehabilitation of a variety of lameness issues, including laminitis and navicular syndrome.

To achieve barefoot performance takes more than a good trim. It is a result of whole horse health. I encourage clients to consider the impact of management and nutrition on the physical and mental health of their horses, and in turn on hoof health.

Hoof care is a constantly evolving field. Veterinary researchers, trimmers and farriers are continually adding to our understanding of hoof form and function, and this is leading to improved ways of caring for our horses and their hooves.

I believe it is important to keep up with new thinking and enjoy reading and researching books and the internet, attending lectures and taking courses on hoof care and wider aspects of horse care and training, both online and in the real world.

23rd April 1999 – NVQ Level 3 in horse care and management, including riding as a specialist unit.