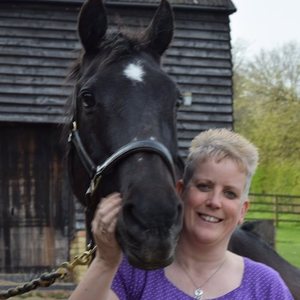 I am a fully qualified and insured Equine Touch, Canine Touch & VHT Practitioner and a member of IETA UK & Ireland.
I utilise a unique, gentle non-diagnostic, non-invasive yet extremely powerful form of holistic bodywork for humans, horses and dogs.

I discovered Equine Touch in 2009 as a horse owner looking for a modality that I could undertake in order to help my 19 year old mare, Tinta. She had played high goal polo since an early age both in Spain where she was born and in the UK, up until a tendon injury had left her previous owner wondering about her future. In 2007 we set out on our journey together, simply to hack around the Buckinghamshire countryside and learn from each other.

Having enlisted the services of a recommended Chiropractor, I was informed that Tin’s pelvis was misaligned – this was due to the compensation from her tendon injury. She also had restricted movement in her neck from years spent playing polo and wearing a standing martingale – one of the tools of the trade.

Whilst there was no turning back the clock on her past, I needed to be able to do more to help her. I had seen Equine Touch demonstrated at an Alternative Horse event and was amazed at the responses that where gained by performing a few simple moves. This was by no means ‘just a massage!’. I signed up for my Level 1 course in May 2009, my intention to purely help my own horse. However, the power of the modality and the results I was getting working on friends horses had me hooked and in January 2010 I had signed up on the Equine Touch Practitioner Route.

I qualified as an Equine Touch Practitioner four years later in August 2013 having undertaken a number of written exams both in Anatomy and Physiology and Equine Touch Theory and was required to carry out a total of around 120 horse assessments with a final portfolio of 20 in depth Case studies.

Since qualifying, I have spent the last 7 years working on horses and ponies of all ages, heights and breeds from Eventers, Polo Ponies, Dressage horses and show-jumpers to children’s’ ponies, happy hackers and the retired family pet.

Ex-Race horses and nervous, rescue or abused horses now appear to be a speciality for me, probably due not only to the gentle nature of the modality but the fact that it also works on an emotional level and is extremely effective. All the horses and ponies that I have worked on have given me different responses and a great sense of fulfilment, no two sessions or horses are ever the same.

Tinta has been my motivation and guinea pig throughout and quite a challenging one at that! She is now 30 years young, has full mobility in her neck and is still hacking happily around the Bedfordshire countryside. She is testament that Equine Touch works and looks and moves amazingly for her age.

I had come across VHT (the human form of Equine Touch) when I first started to study Equine Touch, before you can even start to work on a horse you need to know the basics and humans give honest verbal feedback so parts of the VHT modality are introduced in the early stages of learning. However it was only through working with my equine clients that I started to notice a mirroring of similar issues in their owners. Quite often after seeing for themselves the remarkable results and relaxation I was achieving with Equine Touch and their horse I would often be asked ‘do you do humans?’ and so I chose to undertake to study VHT in 2013.

Having qualified as a VHT Practitioner in April 2016 my studies have resulted in case studies and assessments of people young and old with varying conditions, injuries, symptoms and backgrounds and all have benefited in one way or another from the sessions. Proving that VHT is not just for horse-riders! In 2018 I enlisted as a Volunteer Holistic therapist at the Chilterns MS Centre in Wendover using VHT which has proved very successful amongst both the clients and physios that use the centre.

I hold Federation of Holistic Therapists (FHT) Diplomas in both Anatomy and Physiology and Pathology. I am a member of the IETA UK and Ireland (International Equine Touch Association) the governing body of the VHT and ET Associations and I am fully licensed and insured.

I recently added Kinesiology to my skill set having studied with The Academy of Systematic Kinesiology (TASK) and gained my Foundation Diploma in March 2017 which gives me additional tools to utilise with both humans and horses. I have a great interest and belief in The Bach Flower Essences and have used them with great success both with humans and animals.

I have recently qualified as a Canine Touch Practitioner (May 2020) and having worked on a whole range of dogs from young crossbreeds to full pedigrees, from assistance dogs, gun dogs, rescue dogs through to agility dogs and the family pet I have gained a wide portfolio and a significant insight into anatomy and physiology and zoonosis since I started to study the modality in July 2017. I have also attended a Canine Conditioning Academy Foundation Course which looks at canine training techniques to develop a strong and powerful core, improve posture, increase flexibility, coordination and balance that are so important for correct movement and the reduction of injury and goes hand in hand with Canine Touch.