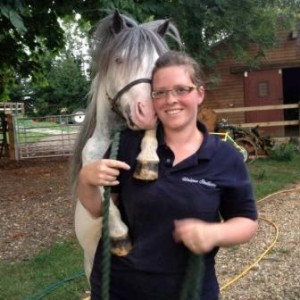 I have been involved competitively with horses since 1987. Like most people I was encouraged to shoe all of my horses indiscriminately. It wasn’t until I started riding endurance that I decided to leave the shoes off, since then I have only shod one horse. I believe that shoes and the forging of them in some cases are vital for the longevity of the horse. In fact speaking to farriers I have discovered that we believe in many of the same ideals and principles, one of  the only variables is the percentage of horses that should or should not be shod.

I started becoming interested in trimming when, in my mid 20’s, my dressage warmblood stallion lacked lustre and was diagnosed with being “bridle lame”.

So began the battle of trimmers versus bad feet. It didn’t appear to matter what we tried there simply was no permanent solution. He was retired but the war raged on until I stumbled across the EPA. I thought about the possibility of joining and even looked into becoming a farrier, until finally signing up to the course. My warmblood is now sound and I do give all credit to the EPT and it’s uniquely in depth course.

I now specialise in trimming miniature horses. I now trim for the public, show and breed privately and produce horses for the public.

The bit I love most about the job is seeing improvement in the horses. To know you have been a small part in improving their lives gives me tremendous job satisfaction. For those whom I simply trim the pleasure comes from building long term relationships with owners sharing a common interest and goal.

I have written for magazines on showing and trimming the most recent will be published in a three part series in ‘Showing World’. I also give talks and demonstrations on trimming and training.

University of Edinburgh – Nutrition and Digestion.