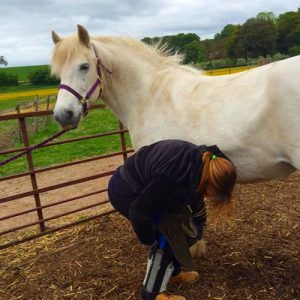 I first discovered Equine Podiatry in 2014; prior to this date I had always had a farrier either shoe or trim my horses. 2014 wasn’t a good year for my beloved horse Sunny, he suffered from Colic and had to undergo major surgery to save his life. After three months of box rest, we were finally given the all clear to turn out and gently bring back into work. My farrier came and trimmed his feet as he had many times before. However Sunny became very footy and I knew something wasn’t quite right. So I called my farrier for some advice. I was told he had probably trimmed him a bit short and that he would be all right in a week or so’s time. Unfortunately, this was not the case and a week later I found him in his field on three legs and unable to move. I called my vet, who came out and diagnosed Laminitis. The vet wanted heart bar shoes and up to another six months of box rest. I couldn’t do this to my boy again and felt that there must be alternative solution. So I googled Barefoot Trimmers and contacted my local Equine Podiatrist.

And so my journey into Equine Podiatry began! I was amazed at how much my EP knew about Laminitis and that trimming the foot was only a small part of the recovery process. She advised me on his diet & environment and worked very closely with the vet & myself, which resulted in him making a speedy recovery back into work in a relatively short period of time. At the same time I watched two friends having their hearts broken when their own horses suffered the same condition and chose the traditional approach to treating it, which unfortunately in their cases wasn’t successful and sadly both horses had to be put to sleep. At that moment I decided that I wanted to help others battling with this awful condition and decided to train to become an EP myself.

So I started my training in 2015 and have now nearly completed my final year. I have left a 16 year career in Telecoms in order to follow my dreams and start looking after horses while supporting their owners.